Caldwell’s Bomb at the Dramatists Guild of America

Rehearsal at the Abingdon Theatre 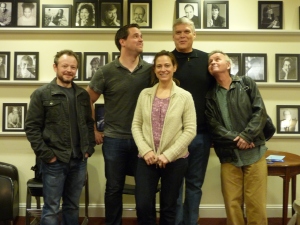 Martin Tanner Productions presented a reading of Caldwell’s Bomb in the Frederick Loewe Room at the Dramatists Guild of America in New York City on the evening of March 1, 2013. Herman Johansen directed and Evan White assisted in the production

We had a great cast, gleaned from 253 applicants for the four roles. Audience reaction was very positive, and we all had an exciting evening of entertainment.

Performance in the Frederick Loewe Room at the Guild

Trip, Roy, Herman, Liz, and Tyler in the Loewe Room